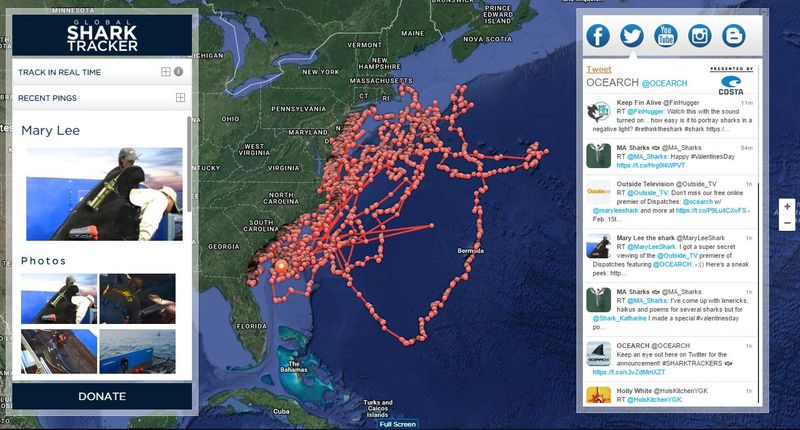 Joey Haar — February 15, 2017 — Tech
References: ocearch.org & thenextweb
Share on Facebook Share on Twitter Share on LinkedIn Share on Pinterest
Ever since 'Jaws,' sharks have had a certain terrifying appeal, and the OCEARCH platform is a great resource for those who've been bitten by the shark bug. The website allows any user to get access to professional scientific data on sharks' whereabouts, with real time updates on the locations of great white and tiger sharks all over the world.

The shark-tracking conducted by OCEARCH uses what the organization refers to as "pings." Each of the sharks in the database has a tag embedded in its dorsal fin. When the sharks breach the surface with their dorsal fins, the tag automatically sends a signal (or ping) to a satellite, updating its location in the ocean.

There are over 100 sharks in the OCEARCH system, and each creature has its own name and historical track. Many of the sharks even have Twitter accounts and thousands of followers.
2.6
Score
Popularity
Activity
Freshness
Attend Future Festival Virtual