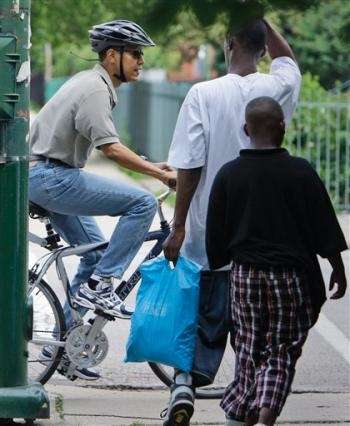 Will Barack Obama Bike With Lance Armstrong For Cancer?

The seven-time champion of la Tour de France hopes that, although Obama is a basketball fan, he’ll donate to Armstrong’s charity. He tried and failed once to get Bush to donate $1 billion, but Armstrong is determined not to miss out on the opportunity again.

“I’m optimistic because unfortunately he’s very near and dear to this disease, having lost his mother and his grandmother (to cancer).”

TrendHunter.com has covered Lance Armstrong’s initiatives before; as seen in the related trend below, the 37-year-old Texan truly doesn’t hold back when it comes to reaching his goals. Don’t be surprised to see Obama on a bicycle in the not-so-distant future…
2.1
Score
Popularity
Activity
Freshness
Jeremy Gutsche Keynote Speaker