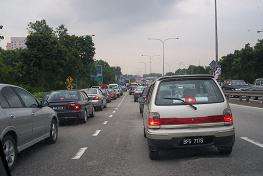 Pearl — June 16, 2008 — Unique
References: africa.reuters
Drivers are often irked when they face the minimum passenger requirements for entering some city downtown cores. However, in Auckland, New Zealand, they have resorted to some pretty ingenious ways of beating these transit rules. Reuters reported on drivers who resort to blow up dolls, mannequins and even dogs dressed up as children. The most common excuse is the imaginary children - kids so small the enforcement officers did not notice them.

For a while, students attempted to make some beer money by hiring themselves out as temporary passengers. Once past the enforcement officers, they would disembark and get back up the road for their next gig! How much are the motorists trying to save? The fine for non-compliance is NZ$150 or about US $112!
3
Score
Popularity
Activity
Freshness