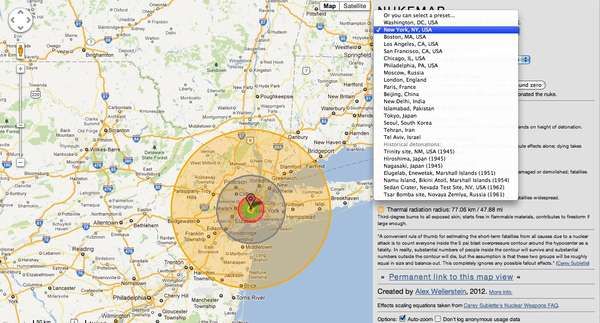 Rebecca Byers — February 24, 2012 — Tech
References: nuclearsecrecy & io9
Share on Facebook Share on Twitter Share on LinkedIn Share on Pinterest
Nukemap was designed by Alex Wellerstein and is an application based on Google Maps that simulates the effects of a nuclear bomb on the major city or historical site of your choosing. The website also lets you select the yield of the bomb by either entering it in kilotons or by selecting one from the preset list, which includes all nuclear bombs designed or tested to date.

Alex Wellerstein is a science historian, which is apparent by the accuracy and detail of the website. From the center where the bomb is detonated, there are five circles that denote the fireball radius, radiation radius, air blast radius and thermal radiation radius. The slightly morbid application is an interesting look at the realistic threat of an atomic bomb, as even the outer most circle from the detonation point is susceptible to third-degree burns to all exposed skin.
3.6
Score
Popularity
Activity
Freshness
Access Advisory Services