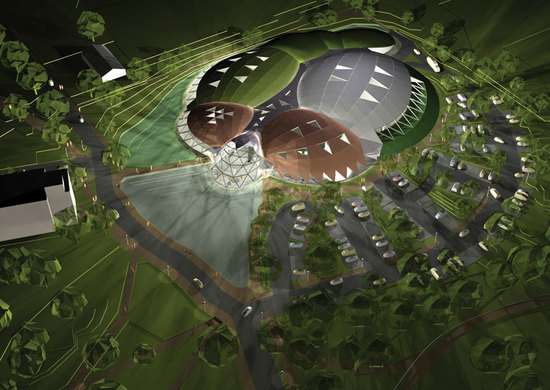 Meghan Young — May 24, 2011 — Eco
References: andrewwrightassociates & dvice
Share on Facebook Share on Twitter Share on LinkedIn Share on Pinterest
Located in Scunthorpe, U.K., the North Lincolnshire Sports Academy is a spectacular domed structure that mimics its surrounding landscape beautifully. Comprised of six domed pods that have been covered with heather and grass, it will cost approximately $24 million to complete.

To be finished by July of this year, the North Lincolnshire Sports Academy features a swimming pool, a sports hall, a fitness suite, a dance studio and a climbing column. It was designed by Andrew Wright Associates.

As I look at the North Lincolnshire Sports Academy, I can’t help but wonder why we don’t have anything like this in Canada or the United States. Granted, there might be a lot more lush greenery in the United Kingdom to be inspired by, but I can only hope that this structure will inspire more around the world.
1.1
Score
Popularity
Activity
Freshness
Attend Future Festival