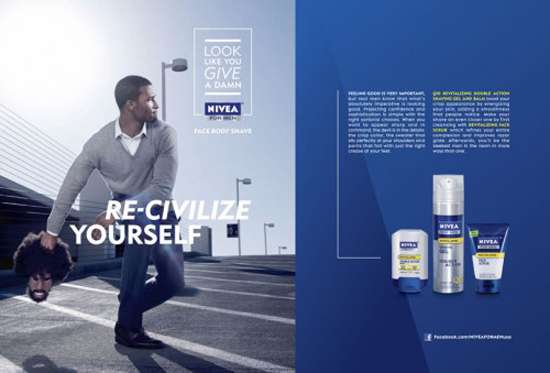 The Nivea Re-Civilize Yourself Ad is Being Questioned as Racist

Meghan Young — August 20, 2011 — Fashion
References: adweek & styleite
Share on Facebook Share on Twitter Share on LinkedIn Share on Pinterest
The Nivea Re-Civilize Yourself ad has become quite the hot topic as people question whether it features racist content. The slogan "Re-civilize yourself" is accompanied by an image of a black model who is about to chuck a disembodied head of his former, uncivilized self, picked-out Afro hair and all. Although it could simply be an arbitrarily chosen, innocent line, there is no doubt that many find it offensive.

As part of the brand's Look Like You Give a Damn campaign, conceived by Draftfcb, the Nivea Re-Civilize Yourself ad does coexist with another one that stars a white model also throwing away his severed, pre-Nivea head. That slogan, however, reads "Sin City isn't an excuse to look like Hell."