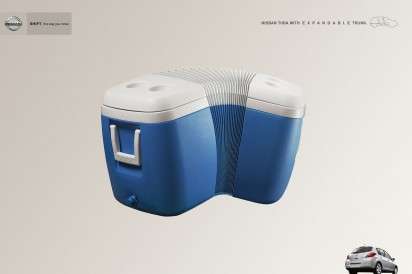 Meghan Young — March 26, 2012 — Autos
References: lewlaratbwa.br & ibelieveinadv
The Nissan Tiida Expandable Trunk ad campaign illustrates this convenient feature through traditional storage containers such as luggage and cardboard boxes. However, these containers have been given a unique twist. Their midsections have undergone an accordion-like treatment to show just how much the Nissan Tiida's trunk can accommodate.

Created by Lew´LaraTBWA, an ad agency based in Brazil, the Nissan Tiida Expandable Trunk ad campaign is both simple and clever. Instead of relying on a complicated concept or a complex image, this campaign goes for a minimalist idea that conveys the message loud and clear.