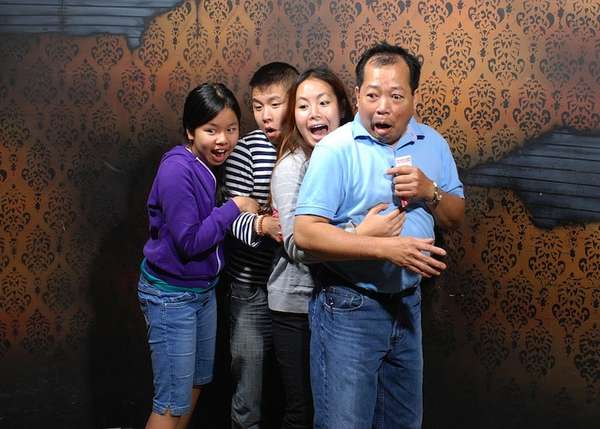 Ana Lopez — October 10, 2011 — Pop Culture
References: nightmaresfearfactory & mymodernmet
Share on Facebook Share on Twitter Share on LinkedIn Share on Pinterest
If you enjoy seeing a person's face when completely consumed by terror, then you’ll enjoy the hilarious pictures from the Nightmares Fear Factory campaign. In order to promote its terrifying attraction and continue to be the 'World’s Most Frightening Experience', this haunted house released a series of photographs to document how scared people were during their visit to the house.

Located in Niagara Falls, Canada, this horror machine proclaims to be the darkest place on earth, and to prove it you only need to see the faces of its victims. From large families to small groups of friends, everyone is about to die from a heart attack. It's hilarious to see a face completely deformed by fear, and the tendency for men to hide behind a woman’s back. If you feel you can’t go on anymore, you can scream "Nightmares," and you’ll be saved from the rest of the ride; however, you will be added to the chicken list. Judging by these photos, that list isn't looking so bad after all.
6.8
Score
Popularity
Activity
Freshness
Attend Future Festival Virtual