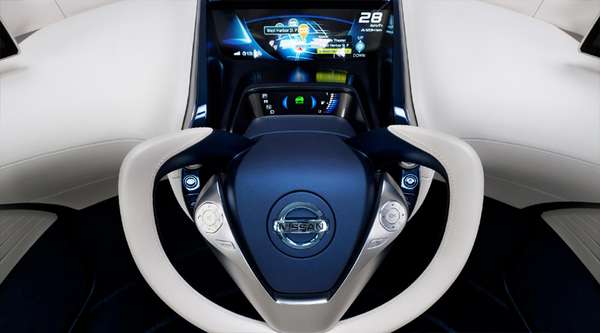 Patrick Walsh — November 12, 2011 — Autos
References: nissan & carmagazine
Share on Facebook Share on Twitter Share on LinkedIn Share on Pinterest
The Nissan Pivo Three concept car is the third evolution in the Pivo line, which is set to be unveiled at the 2011 Tokyo Motor Show. It essentially aims to epitomize the future of compact, eco-friendly cars. Compared with its predecessors, the Pivo 3 is much more pragmatic upon examining its features.

The Nissan Pivo Three now has an automatic valet function, which means it can align itself with electric recharging slots. Furthermore, at less than 3 meters in length, it is capable of performing a U Turn in less than 4 meters worth of space.

The car has in-wheel motors, which allow for greater flexibility and allow for more storage space in this nifty vehicle. Should the battery contain excess electricity, it can be sold back to the grid at peak times.

This is certainly the future for young singletons or couples living in densely populated urban areas such as London.
6
Score
Popularity
Activity
Freshness
Get Better and Faster