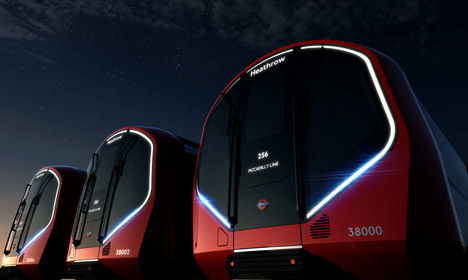 The New Tube for London is Self-Driving

Vasiliki Marapas — October 10, 2014 — Autos
References: priestmangoode & dezeen
Design studio Priestmangoode teamed up with Transport for London to create the 'New Tube for London,' a concept for a fleet of driverless trains. The project will begin to be implemented in the underground network as early as 2020.

The studio nixed the traditional carriages in favor of a singular structure, complete with Wi-Fi and air conditioning. One prototype of the train is equipped with a diver's cab, the other is not. This is because the first trains to be introduced will have drivers; however, they will be gradually swapped out for the driverless model.

The front of the train features a large window framed by curved LED lighting that shines a bright white when the train is in forward motion, and red when it is in reverse. The LED lighting has also been incorporated throughout the train's interior.
5.8
Score
Popularity
Activity
Freshness