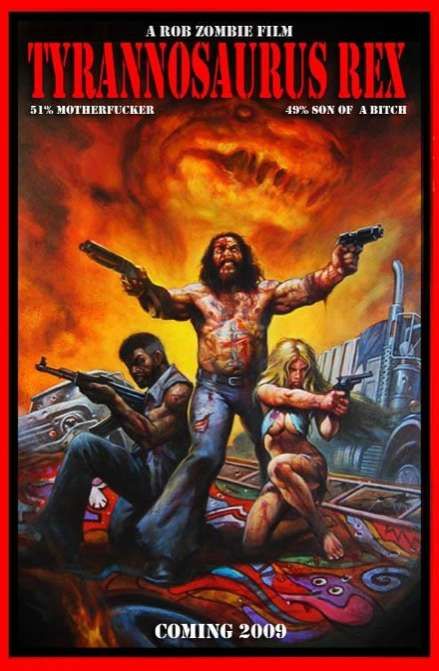 Rob Zombie is gearing up to direct a new movie, “Tyrannosaurus Rex." It will not be the sequel to “Halloween,” and thankfully will feature Zombie’s wife, Sheri Moon Zombie, as is his custom.

“Tyrannosaurus Rex” is supposed to go into production this August 2009. Rumors suggest it will be about a biker gang from hell, based on a comic book Zombie created with Steve Niles called The Nail. However, in a MySpace post, Zombie claims he hasn’t told anyone what the film is about yet.

The teaser poster is eclectically mysterious. It features a burly tattooed man wearing only ripped bell bottoms and wielding two guns. An obvious portrayal of Sheri Moon’s character kneels to his left (she’s pretty much naked, as usual, but who’s complaining?).  With a fiery T-Rex, a 70’s inspired floor pattern and a pick-up truck in the background, the film seems to have potential.

Any other thoughts about the plot line? Take a peek at the poster and feel free to comment below!
2.9
Score
Popularity
Activity
Freshness
Jeremy Gutsche Keynote Speaker