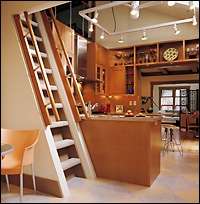 Bianca — September 17, 2007 — Art & Design
References: bangkokpost
As homes and condos get smaller, architects and interior designers are having to think up new ways to maximize living spaces. Just because a space is small, doesn't mean it can't be chic. The Bangkok Post coined the term, "nano-design" to describe luxe living in small spaces.

"Nanoscience has invaded the world of interior design with condominium owners wanting everything to fit into their limited space, just as nanotechnology enables scientists to create tiny but powerful high-tech devices," the Thai newspaper wrote.

Nano literally means something very, very tiny, but the term was actually inspired by the iPod Nano. "If something the size of a business card can hold hundreds or thousands of songs, it's not a big stretch to want today's smaller condos, 50 to 65 square metres on average, to hold as much as possible -- but with style, of course."

North America and Europe are paving the way in this new style of living, particularly in big cities where spaces are cramped. People aren't willing to give up style, however, and instead hire the industry's best to optimize their living spaces. That includes everything from built-in furniture to duplex condo units.

Designing this way means making things compact and ensuring that it all fits in. One technique is to have a lot of built-in furniture, another is getting a duplex condo which feels a lot more like a house. "In a two-floor structure the lower one would be a living room with a high ceiling of around six to seven metres and the upper floor would accommodate the bedrooms. The high living-room ceiling means one can look down and see what's going on below."

Of course, one could always just move away from the city where bigger homes are more affordable. But that's not what these people want. They want the pulse of the city, want to be close to work, and they want it so badly, that they don't mind living in close quarters. It's the same thing in Bangkok.