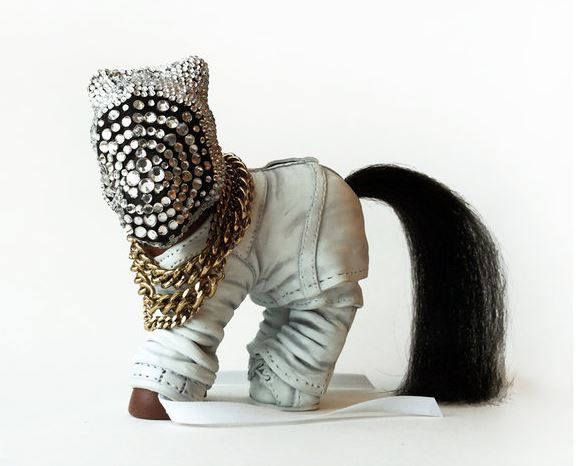 My Little Kanye West by Mari Kasurinen is a Dubious Tribute

Meghan Young — July 8, 2014 — Pop Culture
References: marikasurinen & neatorama
Share on Facebook Share on Twitter Share on LinkedIn Share on Pinterest
There is one rapper that lives to make controversial headlines and to commemorate such a dubious standing in the public eye is the My Little Kanye West. Clad in a white leather outfit complete with a bedazzled mask and thick gold chains, the My Little Pony rendition is a dead ringer for the performer, except for the fact that he doesn't have a tail or four legs.

Created by Mari Kasurinen, who has previously made a similar tribute to Karl Lagerfeld and Lady Gaga, the My Little Kanye West is a great collector's item for those who love 90s memorabilia as well as current pop culture. As Kanye says, "I am Warhol. I am the number one most impactful artist of our generation. I am Shakespeare in the flesh.È
1.4
Score
Popularity
Activity
Freshness
View Innovation Webinars