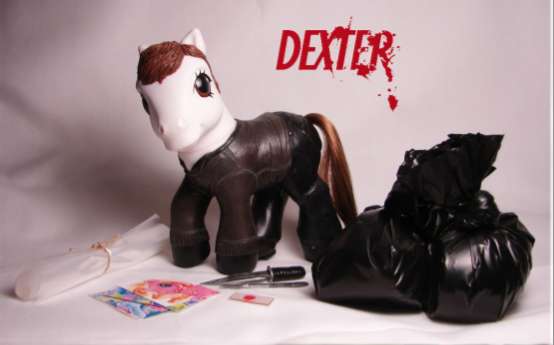 Ariel Weber — December 6, 2012 — Pop Culture
References: woosie.deviantart & neatorama
Share on Facebook Share on Twitter Share on LinkedIn Share on Pinterest
Get ready to creeped out with the special My Little Dexter. The horse, which is usually known as the My little Pony and is usually known for spreading joy, sprinkles and rainbows, has now been turned into a sadistic serial killer that goes by the name of Dexter. For those who may not know, the pony is mimicked after the Showtime series with the same name.

Other than the white silhouette of the My Little Dexter pony, everything else has been replaced. The mane and tail has been change from its usual colorful variety to brown and is also seen sporting the pleather outfit that Dexter wears when he kills. Of course, a murderer also needs to have accessories to complete the job. Included is a knife, a scalpel, slides of blood drops, plastic sheeting, a picture of all of his pony victims who are also already conveniently wrapped up and ready to be dumped into any body of water.

Classic Toys Revamped
My Little Pony for the New Decade