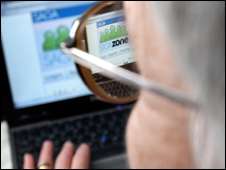 Ayman — May 1, 2008 — Tech
References: news.bbc
Share on Facebook Share on Twitter Share on LinkedIn Share on Pinterest
Microsoft UK unveiled plans for a "Senior PC" at the recent Digital Inclusion conference in London. The machine, which Microsoft is developing in partnership with charities Age Concern and Help the Aged, utilizes a simple and intuitive interface that caters to older users. The machine targets over 17 million UK citizens who are described as "digitally excluded". The "senior pc" will include software that manages prescriptions, and simplified processing tools.

Microsoft is also working on an ad-funded PC and one that uses a "social software licensing model".

"In partnership with Milton Keynes council, this machine will come preloaded with a 'digital literacy curriculum' - a step by step guide to how to get online, be safe and perform simple computer tasks," the BBC says. "Initially it will be given to a thousand households and this will be gradually scaled up to 10,000."
3.1
Score
Popularity
Activity
Freshness
Get the 2021 Trend Report FREE