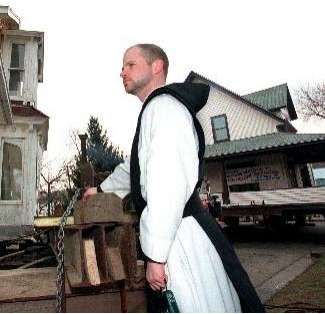 From Wired:
It's early morning in the dense woods of western Wisconsin, and inside a remote abbey at the end of a winding dirt road, seven monks are praying. Father Bernard McCoy, an intense, watchful man draped in black and white robes, bows before the halogen-lit sanctuary. He has been a cloistered monk for 17 years and believes strongly in silence, ­humility, and prayer. Today he is contemplating the adage that we were born of dust and to dust we will return. While that may be true, McCoy has also realized that you can make a ­fortune packaging and marketing a different kind of dust â€“ one never mentioned in the Bible.

McCoy is the self-styled chief operating monk of the abbey's multimillion-dollar online printer-cartridge business. Four years ago, the monastery had little income, mounting debt, and steadily declining cash reserves. All members of the 900-year-old Cistercian Order are expected to work part of every day to support their abbey. As the monastery's steward of temporal affairs, it fell to McCoy to save the brotherhood from financial ruin. His solution: dust.