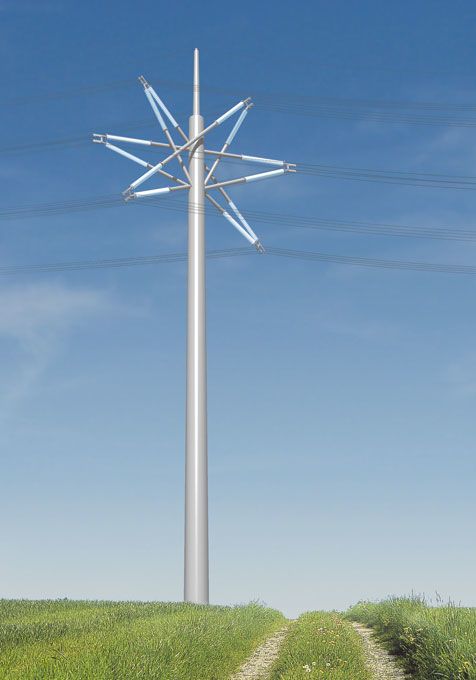 This Modern Electricity Tower is Compact and Attractive

Amelia Roblin — December 29, 2015 — Eco
References: red-dot.sg & gridexpo.eu
Share on Facebook Share on Twitter Share on LinkedIn Share on Pinterest
Pylons are considered beautiful by few, but this modern electricity tower would change that. Designer Hans-Jochen Hilsberg strove to prioritize functionality and efficiency, of course, but he recognized that a complete rethink of the structure could make it aesthetically pleasing too.

Proposed to support the German Energy Transition, the Star Pylon concept would bring power to homes with even more efficacy than the older infrastructure. It would do so with a fraction of the physical footprint, and it would change the face of the landscape in many regions. The shape of the structure would comprise a single, sturdy post, topped with a six-pointed framework, capable of holding a number of wires each. The designer suggests that it would be more cost-effective than the old system too, signifying a brighter future all-round.
3.2
Score
Popularity
Activity
Freshness
View Innovation Webinars