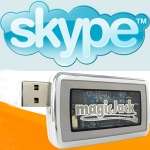 Alex Covert — May 17, 2009 — Tech
References: trendhunter
Share on Facebook Share on Twitter Share on LinkedIn Share on Pinterest
I dropped my landline’s long-distance calling plan years ago, opting instead to use a cheaper alternative… my mobile phone. I have often wondered why I have the landline at all. Apparently, I’m not alone. For the first time, mobile phone-only households have surpassed landline-only ones. The current recession has been credited with this trend as people look to cut costs out of their budget.

There are ways, however, to keep your home phone without paying a high monthly fee - most of which use the still-unfamiliar technology of VoIP (or calls using the internet).

Skype - This free software lets you call anyone, anywhere, for free… as long as they are also members of Skype. For only $2.95/month, U.S. callers can call ANYONE within the U.S., regardless of whether they are members, including cellphones. You can either use your computer’s built-in microphone and speakers or buy optional headsets or compatible phones. Remember that you have to have an internet connection or at least access to the internet. But with wi-fi networks popping up everywhere, this isn’t a big deal.

MagicJack - This service is a bit different. Although it still works over the internet, you have to have your own connection because you physically plug a USB device into your computer, connecting your existing landline phone. For a onetime fee of $39.95, you get one year of free local and long distance calling to the United States, Canada, Puerto Rico and the US Virgin Islands.

The downside with both services is that emergency calls using 911 may not be available depending on service areas, failing internet connections, or downed electric service.
3.2
Score
Popularity
Activity
Freshness
Access Advisory Services

Fringing
Fring Your Friends With Mobile to VOIP Technology