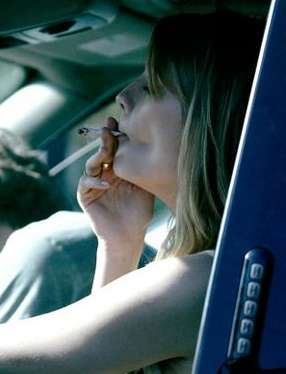 The former O.C. star was arrested after driving drunk, possessing illegal narcotics and driving without a proper license. Barton, 21, argued to her defense that it was "medicinal marijuana" found in her car after being pulled over in West Hollywood.

"With Barton's arrest, we add another name to the Hollywood Hall of Shame, Girls Gone Wild wing," said Michael Levine, a celebrity publicist and author. "It will not injure her career, it will engender more interest in her. Thirty years ago, this would have ended a career. Nowadays society doesn't stigmatize this sort of criminal behavior."

He added, "Three months ago, Barton would have gotten maybe $100,000 to write a book. Today she would get half a million."

Like other Hollywood party girls, Barton is also paid to show up at parties, and stunts like these only increase her value. She was invited to the CatHouse in the Luxor Hotel in Vegas this weekend and now crowds will be more excited than ever to party with the wild woman.

Eco Award-Winning Recycled Chairs
The NO2 Recycle Chairs are Simple, Stylish, and Supportive