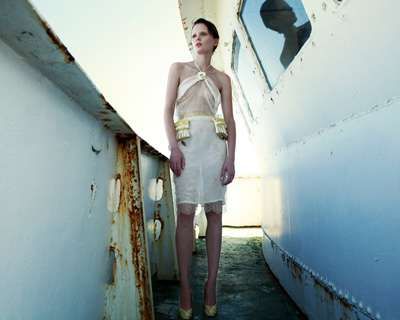 Photographed by Oskar Cecere, the campaign for MirkoG di Brandimarte's Fall Winter 2011 takes place on an old, rusted ship by the name of "Genevieve." The model, beautifully elegant Anastasia Silveri, looks past the ship's dirty railings and piles of scattered rope, wearing diaphanous, see-through pieces that, I'm sure, had the ship been in operation and there was a crew of seamen onboard, would have caused quite a stir.