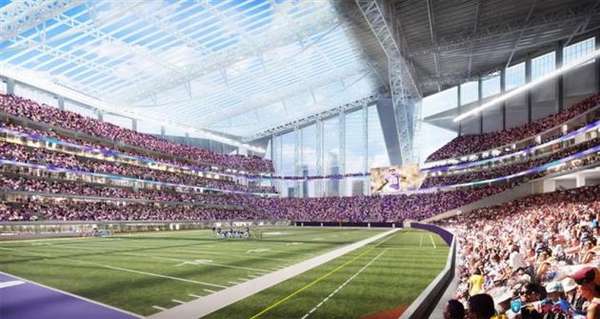 Michael Hemsworth — May 17, 2013 — Lifestyle
References: hiconsumption
Share on Facebook Share on Twitter Share on LinkedIn Share on Pinterest
The latest plans for the Minnesota Vikings NFL Stadium will not only accommodate 65,000 fans, but will also cost an estimated $975 million to build. The harsh weather in the Minnesota region was taken into account to ensure the structure could withstand the brutal winters and even with this in mind, the stadium will feature a transparent roof.

Instead of using glass for the construction of the roof, designers opted for a more durable composite called ethylene tetrafluoroethylene, which will help keep the bitter chill from damaging the structure. The plans for the Minnesota Vikings NFL Stadium reveal posh lounges and private boxes that will bring the latest amenities to the sporting events. Upon completion, the Minnesota Vikings NFL Stadium will be a crowning achievement for the city and add dramatically to the skyline.

With the current schedule, the stadium will be ready to have the Vikings play their first game within the structure for the 2016 NFL season.
2.7
Score
Popularity
Activity
Freshness
Jeremy Gutsche Keynote Speaker