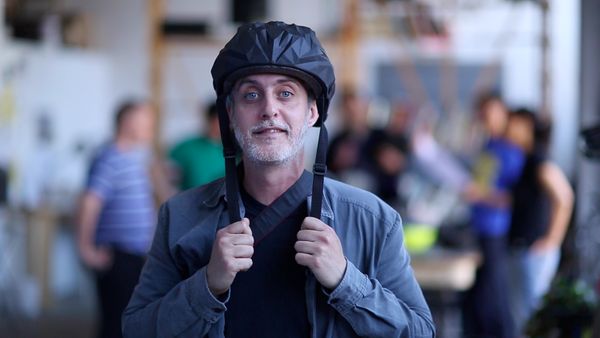 Meghan Young — June 16, 2014 — Art & Design
References: arlduc.org & fastcoexist
Share on Facebook Share on Twitter Share on LinkedIn Share on Pinterest
The MindRider Helmet is a hi-tech cycling safety gear that reads people's emotions to create smoother rides. First reported on in 2012, it has since come a long way in both capabilities and looks. Fast Co Exist reports, "[The MindRider Helmet] tracks your brainwaves to measure your emotions and plots them on a map, so you can see the exact spots when you were most stressed out by traffic."

Designed by Arlene Ducao and Ilias Koen, the information generated by the MindRider Helmet also form a crowdsourced map that suggests where new bike paths should be implemented in various cities. The MindRider Helmet's functions are translated in its revamped aesthetic. Ducao says, "The bumps are inspired by the branching neurons and shape of the brain itself." Chicly geometric, people will want the MindRider Helmet for more than practical reasons.
6.4
Score
Popularity
Activity
Freshness
View Innovation Webinars