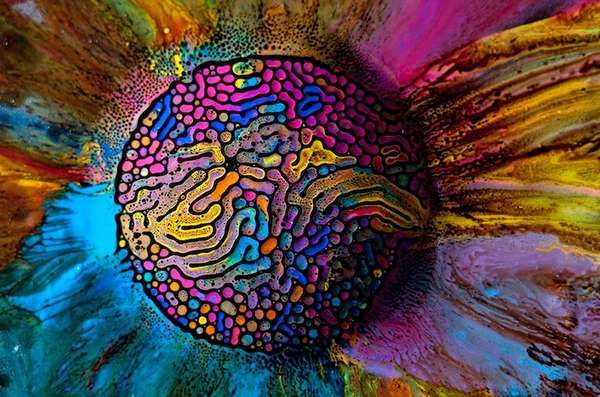 Meghan Young — June 28, 2012 — Fashion
References: fabianoefner & mymodernmet
Share on Facebook Share on Twitter Share on LinkedIn Share on Pinterest
The use of ferrofluids, a liquid which becomes strongly magnetized in the presence of a magnetic field, in art has just been taken up a notch in the series titled Millefiori by Fabian Oefner. Combined with vibrant watercolors, the ferrofluid has become a dizzying array of neon hues. Poured into a formation of interconnected pathways that resembles the pattern of a brain, the Swiss photographer has managed to give this motor oil-like liquid a fresh look.

Initially inspired by the work of Sachiko Kodama, Millefiori by Fabian Oefner took a life of its own as soon as the water color was added. Oefner writes, "With photography it is possible to magnify such tiny structures or to freeze a moment lasting only in the blink of an eye."
4.9
Score
Popularity
Activity
Freshness
Access Advisory Services

Lifeless Landscape Photography
The 'Monochrome' Series is Stark and Serene