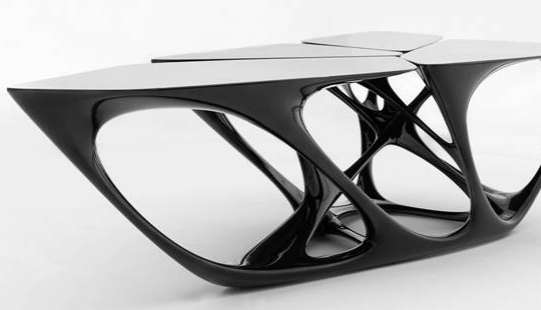 Mesa for Vitra: Writer Edwin Heathcote describes it as, 'Mesa becomes a microcosmic extrusion of the spatial ideas inherent in Zaha's architecture. Form doesn't follow only function but instead is drawn along by the narrative of the plan and flow of space. It becomes something plastic and elastic, more Einsteinian than Cartesian, an evocation of a world shaped by unseen forces and dark matter, a fluid, flowing, four-dimensional world in which a table can distort the space within it and around it. It transforms any space into a Zaha room.'

RÃ© Chandelier for Swarovski: Hadid explains, 'From my first days in architecture at the Architectural Association, I have always been interested in the concept of fragmentation. For me the idea of fragmentation has also to do with the idea of dynamism, of a cosmic explosion of some kind. For this piece, each Swarovski crystal can be considered as an individual element that interrelates with, and responds to, every other crystal. Locked in a spiraling vortex, the crystals direction is determined by the forces of an explosion. As with our architecture, contextual embedding is always considered. The chandelier relates to â€“ and interacts with - each new environment in a unique manner; constantly reinventing itself and offering exciting new possibilities with each installation.'