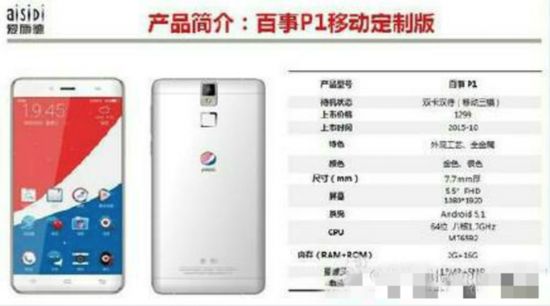 This Mid-Range Smartphone is Designed to Appeal to Millennials

Katherine Pendrill — November 6, 2015 — Tech
References: mobipicker & reuters
Share on Facebook Share on Twitter Share on LinkedIn Share on Pinterest
'Pepsi' recently confirmed that it is producing a mid-range smartphone that will be exclusively sold in China. Although there are a number of smartphones on the market, some Millennial consumers face budget constraints that prevent them from purchasing some of the more expensive models. Pepsi is hoping to attract Millennials by offering a smartphone at a lower price than its competitors.

Pepsi plans to release an Android phone called the 'Pepsi P1.' Although Pepsi is not manufacturing the phone itself, the device will be branded with the Pepsi logo. The phone will feature a 1080p screen, 2GB of RAM, a 3,000 mAh battery and a 13-megapixel camera. Despite the high-tech features, the phone will only cost consumers $200. The phone will only be available in China because of the popularity of Android devices in the country.

Although Pepsi seems like an unlikely brand to begin producing mobile products, the company has consistently demonstrated its ability to remain on the cutting-edge of consumer interaction. As a result, the mid-range smartphone will likely appeal to consumers who already identify with the brand.
0.5
Score
Popularity
Activity
Freshness
Get Trend Hunter Dashboard