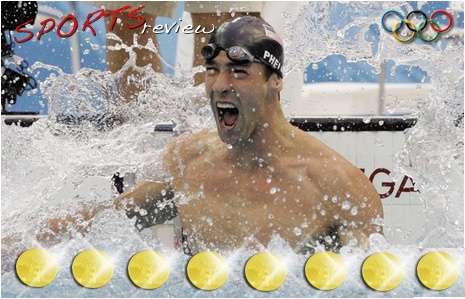 Ayman — August 17, 2008 — Pop Culture
References: trendhunter
Share on Facebook Share on Twitter Share on LinkedIn Share on Pinterest
Michael Phelps has made Olympics history by winning 8 Gold medals in the Beijing Olympic Games 2008. That is a perfect score for the 8 competitions he has participated in. Not only does he have the Midas touch: everything he touched at the Olympics turned into gold; he also set 7 world records at Beijing. Three of these world records were his own!

By winning the Gold medal for the 4x100 meter medley relay, Michael Phelps has broken the all time record of Gold medals won in a single Olympics game. For the past 36 years, that record belonged to Mark Spitz, who won 7 Gold medals in Munich in 1972. Phelps tied that record on Saturday, and broke it on Sunday.

“What he did was and still is an amazing feat, and will always be an amazing accomplishment for the swimming world and also the Olympics,” Phelps said of Spitz, adding, “I’ve said it all along, I want to be the first Michael Phelps, not a second Mark Spitz.”

Michael Phelps has also broken another mighty record during the Beijing Olympic Games 2008. He now has 14 career Olympic Gold medals. That is five more than anyone else in the 112-year history of the modern Olympic Games.

Considering that Phelps is only 23 years old, I have a strong feeling this number is going to increase come the next Olympics.
4.2
Score
Popularity
Activity
Freshness
Get the 2021 Trend Report FREE