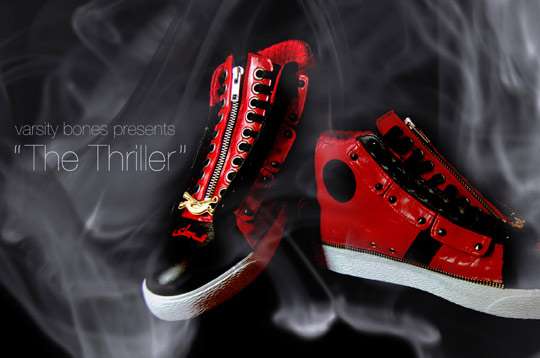 Brian G Randles — September 27, 2009 — Fashion
References: royalefam & highsnobiety
Share on Facebook Share on Twitter Share on LinkedIn Share on Pinterest
Michael Jackson has been the inspiration for many products since his passing this year. SBTG has jumped on the marketing bandwagon and have released Michael Jackson 'Thriller' shoes inspired by his famous red leather jacket from the 'Thriller' video.

The King of Pop Kicks feature a red leather jacket reminiscent of his video, studded collars and black satin. The Michael Jackson 'Thriller' shoes will be available on October 5, 2009.

Implications - In death, celebrities, especially those who achieved icon status in life, inspire an endless array of consumer goods across a variety of industries. From fashion and accessories to home decor, posters, music, television and movies, companies see the loss of these icons as an opportunity to capitalize on the empire they built while they were alive.
5.1
Score
Popularity
Activity
Freshness
View Innovation Webinars