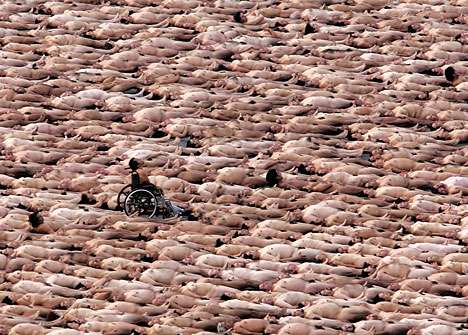 thischick — May 8, 2007 — Art & Design
References: dailymail
Share on Facebook Share on Twitter Share on LinkedIn Share on Pinterest
Spencer Tunick has been busy down in Mexico City photographing 18,000 people who came out for the largest naked photo shoot the world has ever seen. Mexico prides itself on viewing the body as a beautiful object and participants were more than happy to strip down and participate. The website has a great video of the process of assembling and taking the various photos used in the shoot, amazing really.

Implications - Shock art is not a particularly new concept, but using an idea that is typically considered shocking and presenting it in a beautiful and tastefully artistic way is an interesting concept. While nudity is viewed as being taboo in many cultures, it is fascinating to see how comfortable other societies are with the notion of being nude. Companies can expand their global demographic by recognizing differences in cultural ideas and norms.
6.4
Score
Popularity
Activity
Freshness
View Innovation Webinars