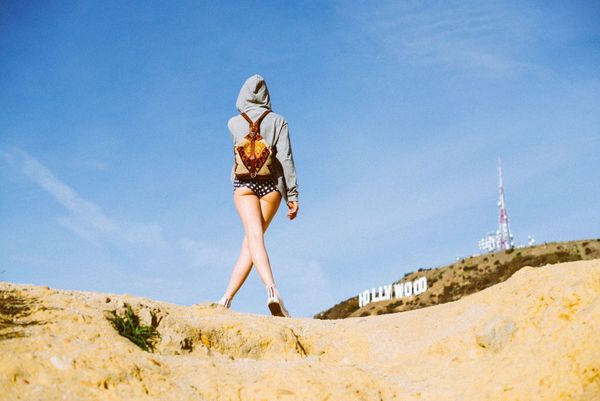 Vasiliki Marapas — May 8, 2014 — Fashion
References: meundies & c-heads
Share on Facebook Share on Twitter Share on LinkedIn Share on Pinterest
MeUndies underwear enlisted the creative help of photographer Ben Kirschenbaum and art director Michelle Plotkin to produce a Hollywood-inspired editorial. If there was ever an industry you need to take your pants off to succeed in, the entertainment industry would be it. And Hollywood, of course, is the entertainment capital of the world.

They explain, “In this shoot we used two locations, both of which elicit a sense of classic Hollywood. The Hollywood sign and Paramount Ranch backdrops were chosen to contrast our bright and evocative visual language.” And what a bright visual language it is! The colors jump off the page with reckless abandon, re-animating the golden age of cinema in the process.

The line features simple, no-frills panties that seem at odds with Hollywood's glamorous reputation and flashy aesthetic. However, this creates an interesting conceptual contrast.
6.1
Score
Popularity
Activity
Freshness
Get the 2023 Trend Report FREE