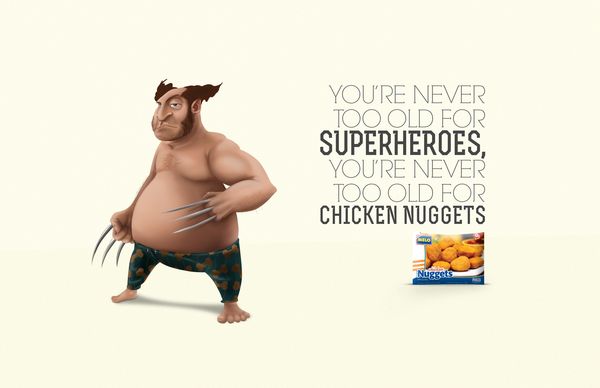 Meghan Young — February 28, 2014 — Lifestyle
References: adeevee
Share on Facebook Share on Twitter Share on LinkedIn Share on Pinterest
The Melo Chicken Nuggets ad campaign depicts a few worn superheroes, although it is safe to say that not many would have assumed they would have let themselves go so much, being crime-fighting mutants and all. Yet Wolverine has a bald spot while Captain America is boasting a budding beer gut and The Hulk has entirely lost his muscular definition. The funny images will certainly catch people's attention.

Conceived and executed by Zaga/ DDB, an ad agency based in Panama, the Melo Chicken Nuggets ad campaign reads, "You're never too old for superheroes, you're never too old for chicken nuggets." Clearly, the older superheroes have simply aged with their nugget-loving audience. Illustrated by Mickey Torres, the campaign was art directed by Emir Zulet and Ricardo Conquista.
5.9
Score
Popularity
Activity
Freshness
Get Trend Hunter Dashboard