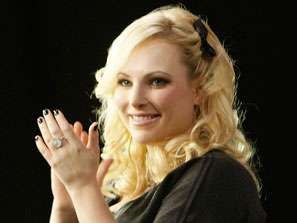 Meghan McCain Stands Up to Laura Ingraham on Twitter

In an article for the Daily Beast, Meghan McCain, 24, wrote:

"I have been teased about my weight and body figure since I was in middle school, and I decided a very long time ago to embrace what God gave me and live my life positively, attempting to set an example for other girls who may suffer from body image issues. I have nothing to hide: I am a size 8 and fluctuated up to a size 10 during the campaign. It’s ridiculous even to have this conversation because I am not overweight in the least and have a natural body weight."

Meghan McCain's daily beast article was a follow-up to a much briefer Twitter message that read, "To all the curvy girls out there, don’t let anyone make you feel bad about your body. I love my curves and you should love yours too."

Meghan McCain lists off other celebrities who have been viciously targeted by the media in "image-oriented bullying" including Jessica Simpson, Tyra Banks, Oprah Winfrey, Hillary Clinton, Pierce Brosnan’s wife, Keely Shaye Smith and Kelly Clarkson after she guest starred on American Idol.

All the power to Meghan McCain for standing up to be a positive role model for body image!
3.5
Score
Popularity
Activity
Freshness
View Innovation Webinars