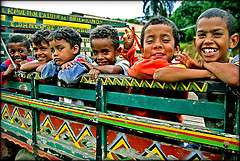 So. Who are social entrepreneurs that your cool-hunting friend had been talking about so enthusiastically over coffee this afternoon? ASHOKA (http://www.ashoka.org), innovators in the field of social enterprise, describe the specie thus: "Social entrepreneurs are individuals with innovative solutions to society's most pressing social problems. They are ambitious and persistent, tackling major social issues and offering new ideas for wide-scale change."

NEXT> by Ramla (http://nextbyramla.blogspot.com) suggests: "Doing good + the right way + following your passion don't have to be exclusive from making a profit as was the case in the world of old business."

Examples of such souls? Muhammad Yunus, the Nobel-prize winning economist and father of micro-finance (Grameen Bank). Rudolf Steiner, founder of the Waldorf school - an alternative educational system based on non-competitive educational theory (Waldorf/ Steiner school). Anita Roddick, who created a beauty empire out of ugly, traditional and homegrown cosmetics recipes (The Body Shop).

I have recently learned of a group Pakistani mothers who are starting a homeschooling system to protect their children from institutional education. That's social entrepreneurship; big or small.

The challenge is to separate social enterprise from the compulsion to give charity. Social entrepreneurs such as Mohammad Yunus believe that it's far better to create socially-geared profitable enterprises than to give charity that we don't track.

15 Ashoka Innovations
From Youth-Oriented Finances to Hubs for Changemakers