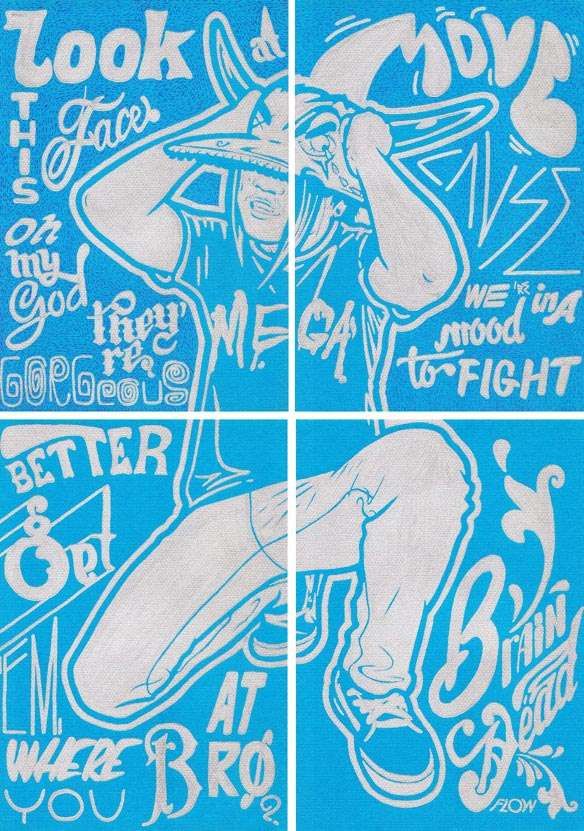 Mega 'I Just Murdered The Alphabet' Series is Poppin'

Romina S. Cortellucci — May 15, 2012 — Art & Design
References: ilovemega & thinkcontra
Share on Facebook Share on Twitter Share on LinkedIn Share on Pinterest
Mega 'I Just Murdered The Alphabet' kills it with this series of hip hop witticisms. Using silver ink on 160g acid-free art paper, the artist ensures each drawing is a dizzy display of detail. Lines such as, "I could never be a thug, they don’t dress this well" from hip hop duo Clipse pop on paper.

Illustrator Mega will be posting an original drawing every day on his site for the next five months until the complete series will be exhibited at Sergeant Paper in Paris in October 2012. He blogged that the series will combine, "hip-hop punchlines, lettering experiments, and savage craft creations."

The hand-drawn pieces are filled with hip hop quotes from an imaginary gang Mega created called 'Société Des Griffeurs.' Busta Rhymes, Juelz Santana and Curren$y are a few of the artists Mega uses. The mashup not only uses hip hop lyrics with graffiti drawings, but is spiced up with notable Asian influences.
2.3
Score
Popularity
Activity
Freshness
Get Trend Hunter Dashboard