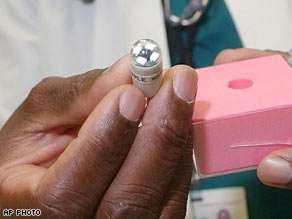 Ayman — February 8, 2008 — Unique
References: edition.cnn
Share on Facebook Share on Twitter Share on LinkedIn Share on Pinterest
In great news for doctors and cancer patients, a reusable low-cost camera pill aimed at detecting early signs of esophageal cancer, (the fastest growing cancer in the U.S.) has been invented at the University of Washington. Unlike a standard endoscope, which can only be inserted into the esophagus after a patient is sedated, the new device consists of seven fiber optic cables encased in a capsule about the size of a typical pain killer. It can "put eyes on tools" for laparoscopic surgery, snake inside a bile duct or fallopian tube, or weave its way deeper inside a person's lungs than any non-surgical device has been able to go. In addition to its small size, the main advantage of this invention is its cost -- a few hundred dollars compared to more than $5,000 for the standard scope.

Eric Seibel, a research associate professor of mechanical engineering and the technology's primary developer, is the only human who has tried the device so far. He says sliding the tiny camera down your throat is like swallowing a pill attached to a string, "Never in your life have you ever swallowed anything and it's still sticking out of your mouth, but once you do it, it's easy."
1.7
Score
Popularity
Activity
Freshness
Attend Future Festival Virtual

20 Cancer-Fighting Innovations
Could Patrick Swayze Benefit From These Scientific Discoveries?