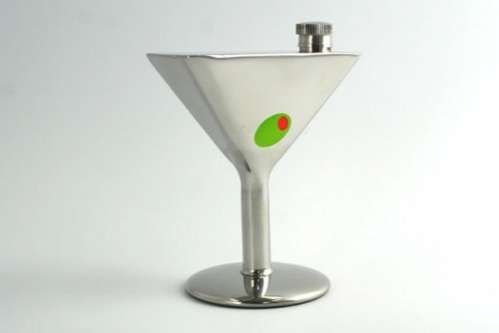 Meghan Young — May 28, 2011 — Lifestyle
References: neatoshop & neatorama
Share on Facebook Share on Twitter Share on LinkedIn Share on Pinterest
Whiskey and scotch might not be the first choice for certain people, so it's nice to see those who don't necessarily prefer hard liquor represented with the Martini Flask. Just like a typical flask, it is made out of metal and features a secure cap so that the drink doesn't stain your clothing or, more importantly, nothing is wasted.

Brought to you by Neatoshop, the Martini Flask also represents the idea of class and taste. Although whiskey, for instance, can be construed as a gentleman's drink, in a flask it has other not-so-flattering connotations. The Martini Flask gives off a more refined air that everyone is craving, especially after the Royal Wedding. What's more, the Martini Flask is reasonably priced at $19.95.
1
Score
Popularity
Activity
Freshness
View Innovation Webinars