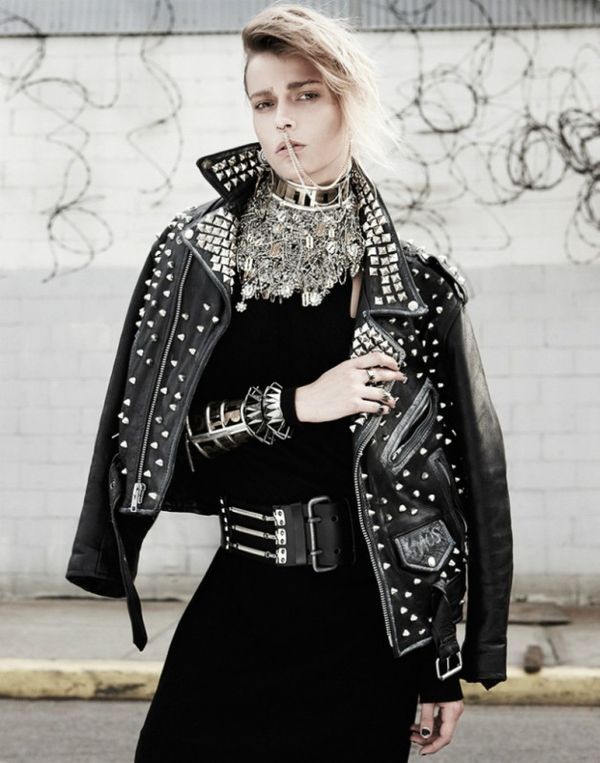 Sarah Dos Santos — October 21, 2013 — Fashion
References: models & fashioncow
Stunning Martha Streck posed for Manolo Campion’s ‘That’s So Punk’ editorial which is featured in the September issue of this year’s V Magazine. The photo shoot is a contemporary blend of Punk Art Theatre and Avante-Garde Expressionism. It expresses themes of confidence, anarchy, free will, modern feminism and a rebellious spirit.

In one image, Streck stands in an iconic hand-over-the-pelvis pose. Michael Jackson, Eminem and several big name pop stars have used this gesture to express rebellion against the government, standards of the music industry and any other rules or laws that hold the middle class back from freedom of expression. This punk editorial embraces that message profoundly.

Black clothing, red lips and stern glares express serious attitude, and fishnets, studs, chokers, chains and boots mimic bondage garments as if to symbolize the way in which women are often restrained by gender role stereotypes. Streck breaks these barriers down with powerful glares and her head held high. Campion’s use of angles to portray her as a power figure conveys the power of femininity that longs to break free.
5.9
Score
Popularity
Activity
Freshness