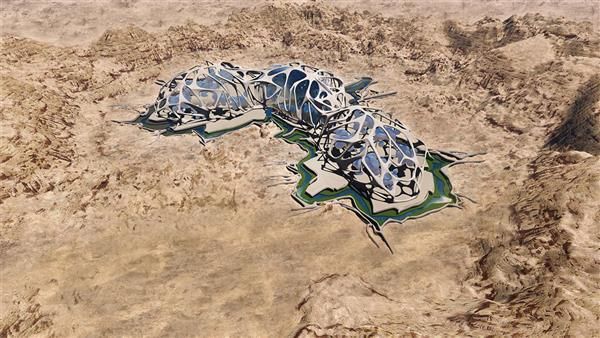 Laura McQuarrie — August 8, 2016 — Tech
References: 3ders.org
Share on Facebook Share on Twitter Share on LinkedIn Share on Pinterest
Extensive trials and tests will have to be conducted before there can be further progress regarding 3D-printed Mars Colony settlements, so Mars City Design is now planning to 3D print groups of Mars structure prototypes and set them up in the Mojave Desert three years from now. Mars City Design ultimately hopes to create a self-sustaining city on the Red Planet.

The three best 3D-printed prototypes will be printed, including contenders like the 'Neurosynthesis,' which proposes the integration of a closed river system, 'Project Dandelion,' which imagines the use of soil as a source of oxygen and energy and 'Vertical Farms,' which puts a focus on maximizing the output of food on the planet.

Earlier this year, Mars City Design was successful in raising over $30,000 on Kickstarter to fund its City on Mars workshop.