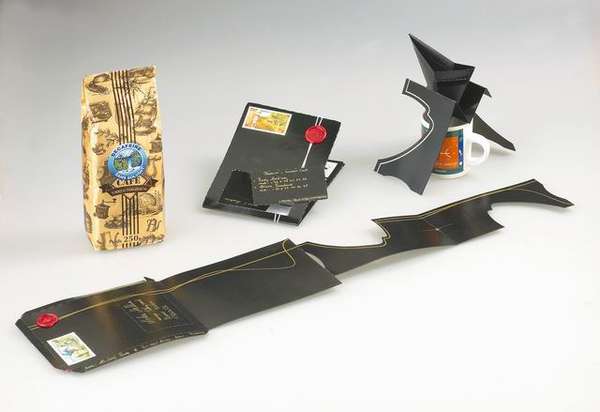 Anton M. Steeman — March 2, 2008 — Marketing
References: amsteeman & frovi
Share on Facebook Share on Twitter Share on LinkedIn Share on Pinterest
An eco-friendly packaging for a fair trade product. This personal mail campaign consists of a black envelope with samples of "fair coffee" and a coffee filter which can be constructed from the card.
In this era of electronic communication setting up and executing a direct mailing campaign is quite a challenge, but might be very successful if the presentation is a perfect picture.

Since 1994 KorsnÃ¤s, a card board manufacturer in Sweden organizes award-winning packaging design competitions in several European countries. It started in Spain and the UK. In 2006 Germany got its first competition and in 2007 followed by France in collaboration with the University of Reims. This year the French competition had the luxury packaging as theme. The first prize, however, did not go to the most eye-catching design but to the perfect example of intelligent design for creative marketing: an effective direct mail campaign, standing out from the crowd and using resources sparingly and efficiently.

The design was a hand-addressed black envelope containing three samples of third world coffee, intended to attract retailers to test the â€œfair trade coffeeâ€ quality. With the samples comes a disposable in-the-cup coffee maker, which can be separated from the card board. An interactive marketing concept which inevitably activates the recipient to respond, to brew his cup of coffee immediately by tearing some parts from the cardboard envelope and construct a coffee filter which can be placed above a cup. A perfect design to stimulate experimenting the sent "Fair Trade" coffee.

The card board folded envelope is made from FrÃ¶vi White carton board, in this case printed in deep black. The special colour of the envelope, the â€œhand-writtenâ€ address in gold print and the â€œofficialâ€ seal is more than sufficient to attract the attention of the recipient.

The students Adrien Rambaud and Rudy Martinez of the University of Reims, designers of the winning entry took a look at how society will be in 2017 and how our lifestyles will change. â€œEnglish will become much more important. Even the French have to understand this...Capitalism and globalisation will increase and no-one can do a thing about it. Communism will be dead. Even China wants to forget about Mao. The environment will be the biggest topic of conversation other than sex, food, music and politics, and fair trade has to change its concept. Otherwise third-world producers of cotton, cacao, rice, bananas and coffee will be even poorer than they are today.â€
The designers themselves set the trend with this â€œblackmailingâ€ campaign.