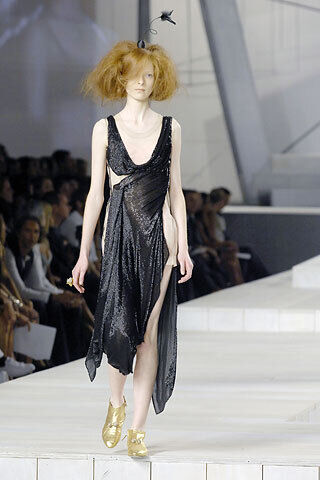 Wallpaper* — September 12, 2007 — Luxury
References: wallpaper & wallpaper
After seasons of immaculate tailoring, Marc Jacobs makes a departure into the realm of deconstructed fashion. Was the show running late because he hadn't quite finished his collection, or is this the way forward?

"The show was so late â€“ two hours â€“ that social snappers resorted to photographing any good looker with a Taco Bell ad commercial to their name," Wallpaper Magazine reported. "The slim and buff Jacobs presented a show in reverse, running down the catwalk to take applause before the show had begun and sending out a finale line-up of girls."

"But when it got down to the clothes, everything was deconstructed â€“ half-made so that a sequin dress featured a top which looked stuck onto the collar bones, the back revealing a bra strap. A sweet pink creation in crepe allowed a side view of French knickers and a bra strap; an embroidered daisy fabric was draped across the body, held fast on one shoulder revealing a slip beneath; and a cashmere sweater dress revealed a panel of tulle at the midriff as though cut in half and stretched. Charming."

Tech-Infused Side Tables
The 'DOT TABLE' Has an Adjustable Height, Charging Capabilities and More