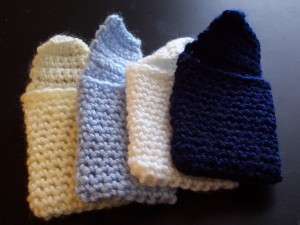 But this is only the first step in the humanization of electronics. In an age when the average person has more electronic devices than close family members, it's no wonder that crafty people are seeking ways to make their new battery-powered BFF's comfier and cozier than ever.

Take the example of The Wee Jenny's knit iPod cozy. At first glance, it looks like something knitted for a cute little baby's foot. But it is in fact made for a standard iPods with a protective flap-over. The make will be retailing them on Etsy soon so check out her site. If you're handy with the knitting needles, she also provides the pattern.

This is part of my series on cute technology. Also see my post on cute robots.

98 iPod Accessories
From Wee iPod Speakers to Music In Utero