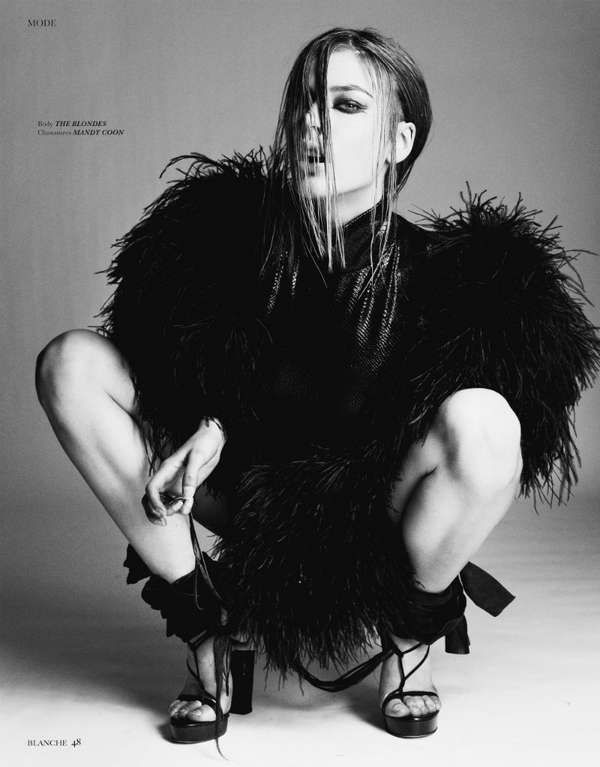 Jordan Sowunmi — August 23, 2011 — Marketing
References: blanche-magazine & fashiongonerogue
Share on Facebook Share on Twitter Share on LinkedIn Share on Pinterest
The Madelene de la Motte Blanche Magazine editorial is an agressive, attitude-filled shoot that displays the kind of sensuality and spunk that typically helps a young model transition from lower-tier to mid-level in the highly competitive world of high-fashion modelling.

The 19-year-old beauty is represented by Elite Model Management in London and is a fresh face, with only one year of professional modelling under her belt. That hasn't stopped her from quickly flying up the success ladder. Madelene de la Motte has worked with some of the biggest names in the fashion world, including Calvin Klein, Dazed & Confused Magazine, Rag & Bone, and British Vogue.

In the Madelene de la Motte Blanche Magazine shoot, she manages to exude sexuality without showing much skin. The deft way she purses and arches her lips is alluring, giving her the aura of a model enjoying herself in front of the camera. My favorite shot in the series is a close-up of de la Motte's face, her head covered in a black hat, her eyes obscured by her lengthy blonde hair, and her mouth slightly ajar. The shot is sexual, aloof, and mysterious -- three of the most important and consistent qualities in many of the world's most famous superstars.

At such a young age and filled with so much talent, it should be no surprise if we see Madelene de la Motte joining the ranks of Chanel Iman, Lindsey Wixon, and Lily Cole as stunning young models to watch.
5.6
Score
Popularity
Activity
Freshness
Jeremy Gutsche Keynote Speaker