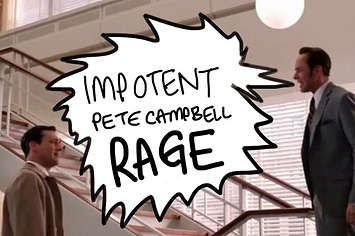 — June 30, 2013 — Pop Culture
References: madmenwiththingsdrawnonthem.tumblr
Share on Facebook Share on Twitter Share on LinkedIn Share on Pinterest
Mad Men's latest season may be over, but the 'Mad Men With Things Drawn On Them' Tumblr is keeping the spirit of Don Draper alive. This hilarious blog works on a very simple concept. The two blog users, Bryony and Kevin, simply take screenshots from episodes of Mad Men and add their own satirical caption by writing directly onto the photo itself. The blog is full of inside jokes for fans of the show, but also relates to those who haven't seen a single episode, based solely on the blog's general wit.

Throughout the blog, the most hatable characteristics of each of Mad Men's central characters are mocked to great comedic effect. Pete Campbell's short temper, Peggy's go-getter attitude and Don Draper's overwrought flashbacks to his dysfunctional childhood have all been tackled by Mad Men With Things Drawn On Them, giving the serious, understated drama prevalent in Mad Men a comedic edge. This unique blog proves that sometimes, a little bit of comedy can go a very long way.
2.9
Score
Popularity
Activity
Freshness
Access Advisory Services