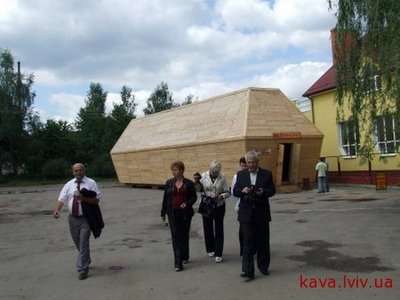 The structure of the Macabre restaurant is the world's largest coffin at 20 meters long, six meters wide, and six meters high. This odd establishment is called Eternity and it is the brainchild of a local group of undertakers from the resort town of Truskavets near the Polish border.

Morbid diners can browse the funeral paraphernalia before ordering from a menu that includes â€œNine Dayâ€ and â€œForty Dayâ€ salads - named after local mourning rituals - and an ominous-sounding dish called "Let's meet in paradiseâ€. Coffins of a normal dimension serve as tables and single candles on the tables contribute to the funereal mood.

The undertakers hope that their restaurant will be confirmed as the world's biggest coffin, attracting tourists to a region best known for its mineral-rich bathing waters.
2.8
Score
Popularity
Activity
Freshness
Jeremy Gutsche Keynote Speaker