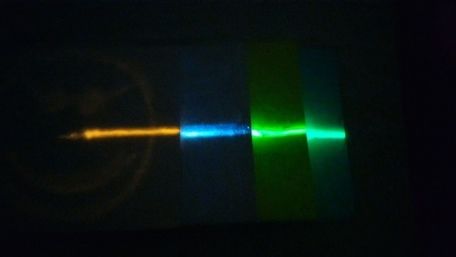 Joey Haar — August 4, 2016 — Tech
References: kickstarter & digitaltrends
Share on Facebook Share on Twitter Share on LinkedIn Share on Pinterest
'LumoPad' is a marker-free drawing toy similar to an Etch-a-Sketch, but instead of drawing with dials, LumoPads let consumers draw with light. Using a light effect called "phosphorescence," the electrons in the molecular makeup of LumoPads react to light, letting users draw glow-in-the-dark images that stay bright for a minute or more.

Though the active material in a LumoPad is as thin as a sheet of paper, the current prototype is placed on a lightweight piece of foam backing to add some structural integrity. The LumoPads come with a small LED keychain that consumers can use as their brush, although the flashlight on a smartphone functions equally well.

After gaining some experience with LumoPads, drawers can get a relatively intricate level of detail. By moving the LED closer or farther from the pad, the lines will get thinner or thicker, respectively, and moving the LED faster makes lines brighter.
4.2
Score
Popularity
Activity
Freshness
Attend Future Festival