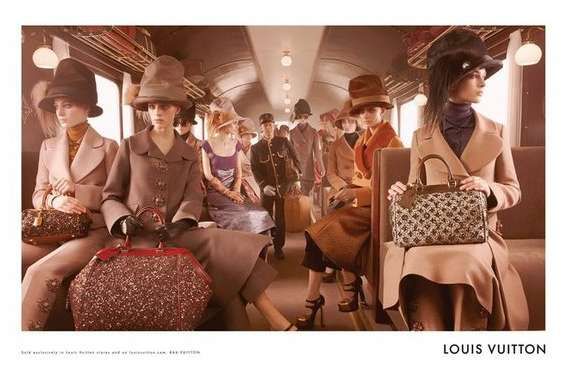 The Louis Vuitton Fall 2012 Campaign is Glamorous and Romantic

Meghan Young — June 15, 2012 — Fashion
References: louisvuitton & fashionologie
Share on Facebook Share on Twitter Share on LinkedIn Share on Pinterest
Although the reality of traveling by train in the Victorian era was probably a lot tougher, the Louis Vuitton Fall 2012 campaign hones in on its luxurious and romantic quality. A stunning ad campaign to say the least, it revolves around the $8 million, custom-made train that was commissioned by Marc Jacobs for the Louis Vuitton Fall 2012 runway show. No easy feat, it was deconstructed, shipped to the New York studio and rebuilt for this memorable photoshoot. Jacobs says, "We wanted to continue the journey we started with the fashion show--the glamour of travel and the romance of going somewhere,"

The Louis Vuitton Fall 2012 campaign was lensed by photographer Steven Meisel. The ladylike clothing and accessories are beautifully complemented by the opulent backdrop of the locomotive.
6.1
Score
Popularity
Activity
Freshness
View Innovation Webinars