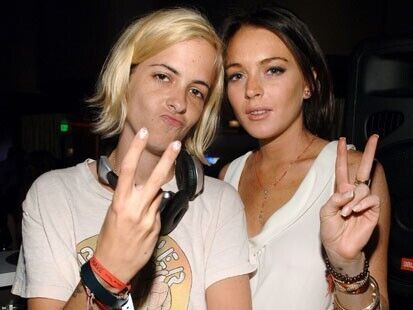 Bianca — August 30, 2008 — Marketing
References: celebrity.myspace & news.yahoo
Share on Facebook Share on Twitter Share on LinkedIn Share on Pinterest
We knew Lindsay Lohan was having a tough time with her dad, but somehow most of us assumed she'd build tolerance, or at least pull her opinion together in public. Not so anymore; Lindsay Lohan, 22, lividly vented about her father in her MySpace blog.

After openly criticizing Lindsay Lohan's decision to pursue a public lesbian relationship, and possibly even marriage, Michael Lohan was not winning points as a supportive father figure. He told big media outlets his daughter's relationship with "parasite" Samantha Ronson "toxic," among other things.

As revenge, Lindsay posted a story on her MySpace blog where she called him a "public embarrassment" and a "bully" and defended Samantha Ronson, calling her "a girl that means the world to me."

On her MySpace page, Ronson wrote that there is "no need to publicly defend my role in Lindsay's life — I'm just sorry that she likes me more than him."

"The people were right, and he is yet to change- but this time, without his daughter by his side- He has become a public embaressment and a bully- To my family, my co-workers, my friends, and a girl that means the world to me (its obvious who that is).

He has no idea what is going on in my life because i have chosen not to involve him in it- His recent attack on my life and my loved ones is simply for an ADDICTION THAT HE HAS- FAME. Why he feels the need to comment on anything in my life that i may want to keep private, is beyond comprehension- If he really cared about me and my life, then he would learn to respect my wishes by staying out of it.

Samantha has not and would never sell me out. Nor has my mother, who is wonderful.

This further proves that any information that my father has about me or the people in my life is internet based- and about as accurate as a page six item.

I'm not going to engage any further, though i probably could go on..."

And yesterday added, "I hope he uses this time to keep mourn the loss of his father, rather than taking the time to talk to the media about me or anyone in my life. Better he just keeps his mouth shut."

Affordable Portuguese Red Wines
Silk & Spice is an Has a Full Body Flavor at an Affordable Price.