Lohan Bares All To Be Monroe 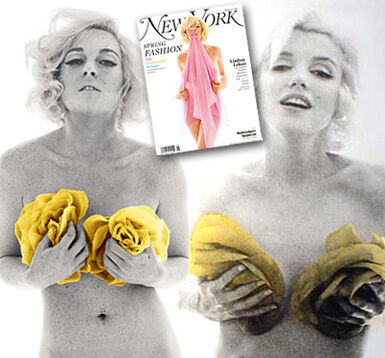 Bianca — February 17, 2008 — Pop Culture
References: media.nymag & truemors
Share on Facebook Share on Twitter Share on LinkedIn Share on Pinterest
Marilyn Monroe continues to be one of the world's most influential female icons, as is continually proven by celebrities who try to emulate her. The latest is Lindsay Lohan who posed for a spread in New York Magazine inspired by the famous shoot, "The Last Sitting" in which Marilyn Monroe got naked and quite drunk.

The blonde bombshell's 1962 shoot took place a month and a half before her barbiturate overdose. She was photographed by Bert Stern at the Hotel Bel-Air who agreed to do a modern re-shoot using Lindsay who was also completely naked.

Lindsay wore a bright blond bob and winged 60s eyeliner, and not much else, just like Marilyn had in the original photographs. A while back Lindsay had become strikingly thin, but now that she's regained her curves, even her physique was similar to the original icon's.

All the images can be seen at NYMag.

"I didn't have to put much thought into it. I mean, Bert Stern? Doing a Marilyn shoot? When is that ever going to come up? It's really an honor," Lindsay told NY Mag.

Some are saying the shoot is a tribute to her late friend Heath Ledger, whose final portrait we featured here a few weeks ago. Lohan admitted it was part of the inspiration.

"They are both prime examples of what this industry can do to someone," Lohan says of Monroe and Ledger's overdoses turned pop culture news, but when asked how something like that could happen to a celebrity she answered, "I don't know. I'm not them. But I sure as hell wouldn't let it happen to me."
6.3
Score
Popularity
Activity
Freshness
View Innovation Webinars