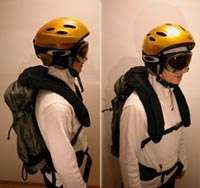 Snowpulse has come to the rescue with Lifebag, an inflatable neck and shoulder protection system designed to inflate in the event of an Avalanche.

"Like an airbag, it's designed to protect the head and thorax while keeping you afloat during an avalanche," CoolHunting said.

"Manually deployed similar to a parachute, the 150-liter shield inflates in less than three seconds and deflates after 90 seconds. Should you get buried, when the bag deflates you'll at least have a small air pocket to breathe, scream and hope to be found."

The only avalanche I have to worry about falling under is that of one from all the bills that keep coming to my house, but I suppose if you lived in a more mountainous and snowy region like the Alps, it could be a problem.
3.2
Score
Popularity
Activity
Freshness
Get Better and Faster