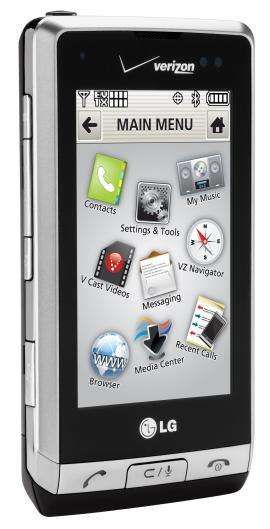 Bianca — June 12, 2008 — Tech
References: crave.cnet
Share on Facebook Share on Twitter Share on LinkedIn Share on Pinterest
LG fans and cell phone junkies are rejoicing the launch of the LG Dare, the LG Decoy and the LG Chocolate 3. All three Verizon Wireless handsets are being welcomed, but it's the touch-screen LG Dare that's received the most press so far. It's yet another iPhone competitor, along with the LG Vu and the Samsung Instinct. Setting the LG Dare apart from the rest is that also comes with stylus that's ultra savvy at recognizing hand writing (yes, apparently it could even recognizing chicken scratch and doctor's writing) as well as a virtual QWERTY keyboard. Other features include a 3.2 megapixel camera optimized for low light and built-in photo editing as well as the ability to upload photos to a social networking site.

The LG Decoy is "the first ever phone to have a stowaway Bluetooth headset integrated into the back of the device," Crave.cnet.com says of the slider which hits stores June 16.

"Features include an FM transmitter, an MP3 player of course, V Cast support, dual speakers, stereo Bluetooth, 1GB of internal memory plus a microSD card slot, a 2.0-megapixel camera, and more. According to reports, the Chocolate 3 will arrive in stores in July as well," Crave says.