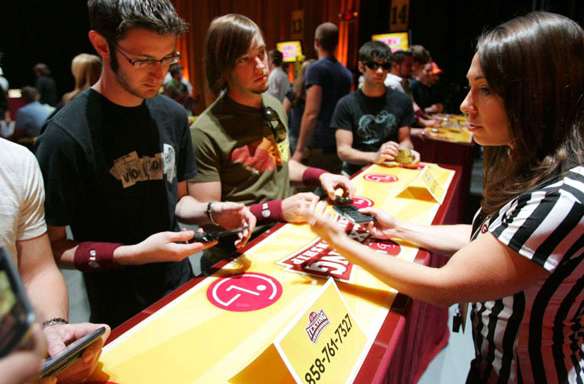 While you could liken them to "texting Olympics", the LG Canadian Texting Championship, which award a top prize of $25,000, work as an incredible PR opportunity for LG electronics. The "down and dirty battle of the QWERTY" was the final event after months of mall contests across Canada, each one acting as opportune advertising venues for LG.

I had the chance to go to the final championships in Toronto, and it was quite a highly publicized events, with cameras and film crews, liquor and an elaborate buffet for viewers in the stands.

The contestants, mostly teens, with a few tech savvy young adults among them, battled for the title of LG Texting Champion.

The winner was Mark "Jervy" Breiva, a 17 year old from Mississauga, Ontario. What gave him his cred? Breiva admits to sending 700 text messages per week! Most impressive? "I don't like acronyms. I prefer full words." He got his champ title after nailing the winning phrase, "my hom is on da dnc flor" in 7.401 seconds.
2.1
Score
Popularity
Activity
Freshness
Attend Future Festival Virtual